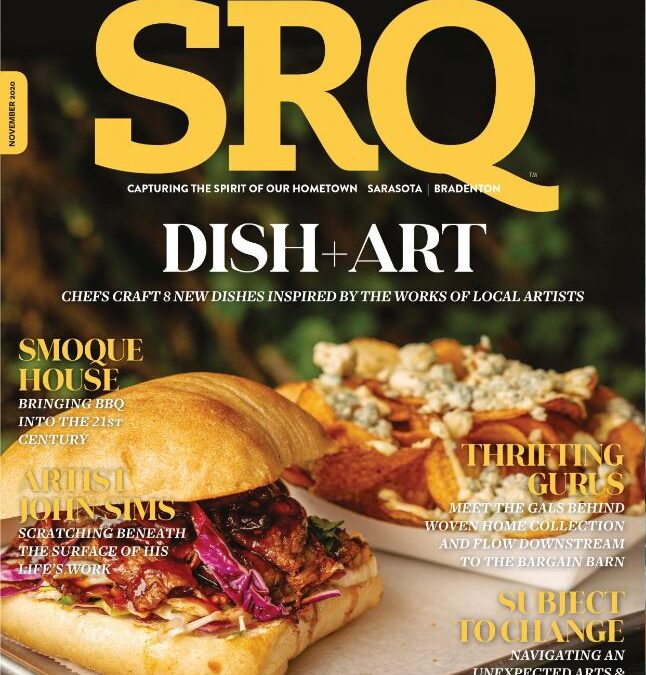 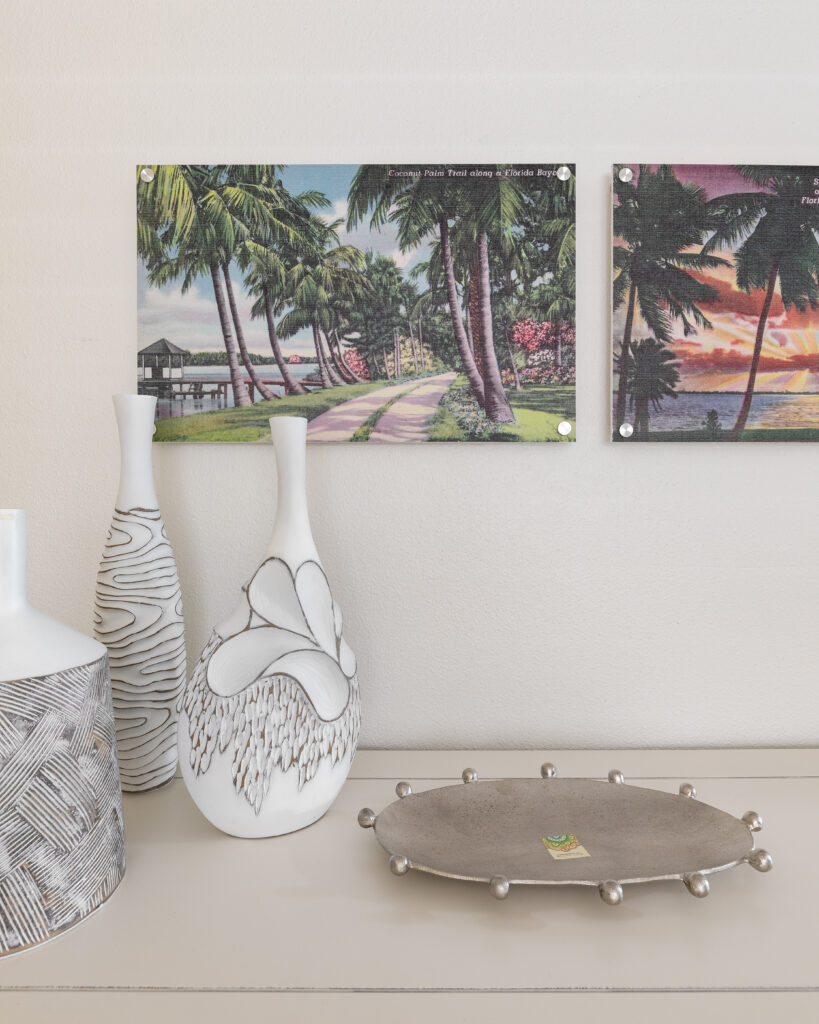 “Over the last 40 years, locals, newlyweds, families and soloist travelers alike have scouted Sailfish Gulf Suites’ intimate retreat with waterfront views only the Gulf of Mexico can provide. Since its 1967 build, the property gripped onto its ideal location; however, its furnishings naturally began to show its age—outdated and in need of a modern face-lift. Local interior designer Kelly Kaiser, owner and lead designer at Orange Moon Interiors, saw plenty of potential and was called upon by the Holmes Beach vacation rental to bring new life into the ’60s vibin’ bungalows. 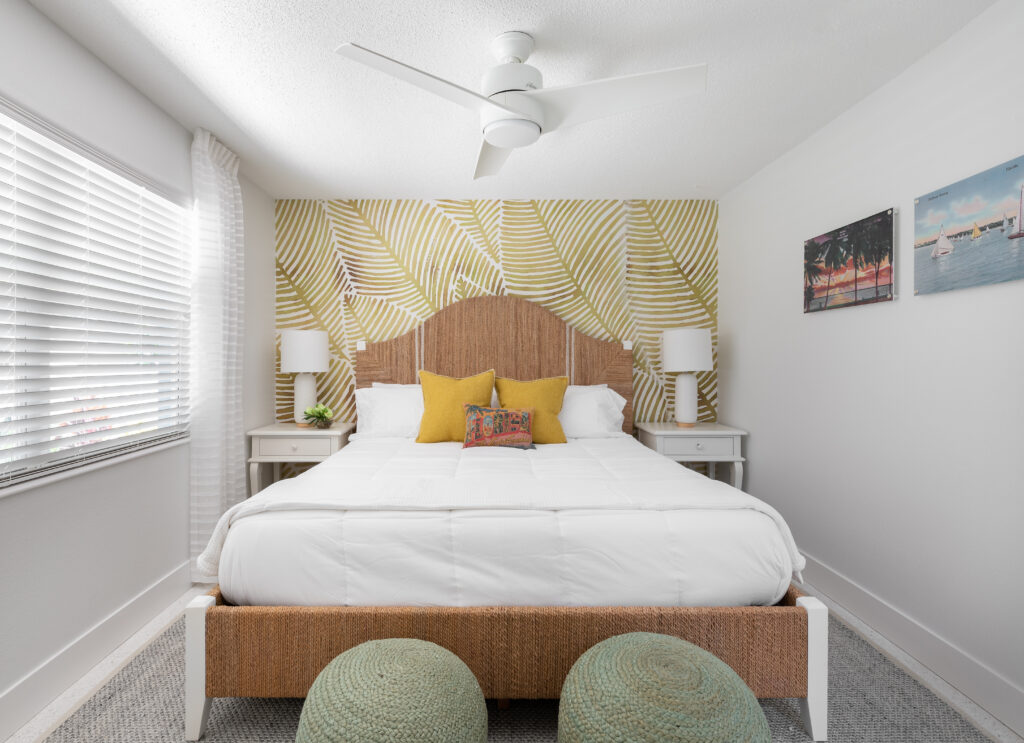 Orange Moon Interiors is no stranger to transforming outdated spaces around the country into livable, luxury sanctuaries, but being a Bradenton native, Kaiser held a particular sense of local pride about this project and location. “This town means a lot to me. I remember my grandmother buying me a bathing suit when I was eight years old at the West Coast Surf Shop—right next door to the Sailfish,” she says. “And then, of course, Skinny’s restaurant is across the street, which is an old Bradenton favorite. If you haven’t had a Skinny’s burger, you are missing out.” 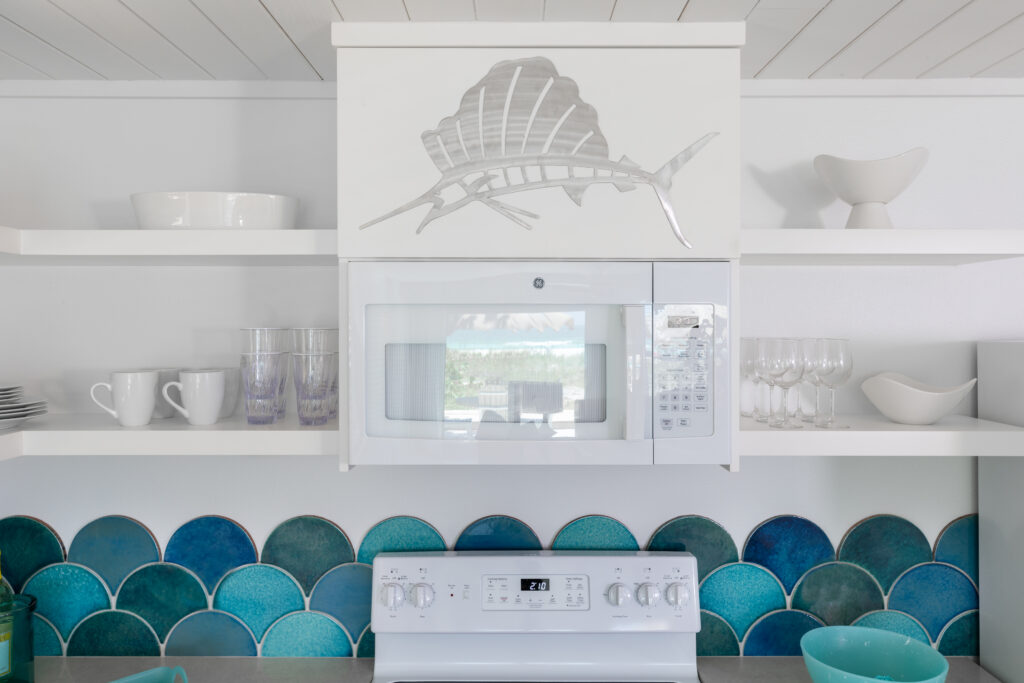 That being said, Kaiser also admits it’s surprisingly difficult to find a nice, updated and affordable beachfront vacation rental in Anna Maria or Holmes Beach, which was a major component in her decision to take on the project and raise the standard of Gulf Coast vacation rentals.

“This area has so much potential and I hope this property becomes the standard of vacation rentals for years to come. There are so many around here that need updating.” The Sailfish Gulf Suites’ renovations, which commenced in August 2020, seemed to have come at a suitable time for Manatee County beaches, as more business owners continue to invest in new lots and in existing properties in need of an uplift.

Meanwhile, a $17.3 million investment is being made to the beaches of Anna Maria Island—propelling an extensive beach nourishment project to protect the coastline sands from the Gulf’s tides and keep the coastline visitor-friendly. “This was the time to do the renovation,” Kaiser says, “and to do it right.” Her vision for Sailfish encompassed a clean, calm, crisp style to reflect the serene feeling you sense being near the ocean. Each of the four bedrooms feature a seaside, Gulf Coast palette with a different painted mural behind the headboard of each focal bedroom wall.

“I wanted to keep a piece of Old Florida, but also help the Sailfish draw a new generation of visitors,” she says. One original design feature Kaiser couldn’t bear to get rid of as the rentals were being gutted was right under her feet. Charming 1967 bathroom tiling exuded mid-century sentimentality and begged to stay put.

“There was no way I was going to rip out that old aqua and sea-green bathroom tile and cover up that gorgeous terrazzo flooring. It wouldn’t have made any sense to do so because it was in line with the architectural integrity of the building. Putting anything over that terrazzo would have been a sin.” As for the more contemporary finishes and decor integrated throughout the new space, American Remodeling Contractors, a full-service design-build remodeling contractor in Bradenton, was sourced, with whom Orange Moon Interiors has worked on previous local projects. 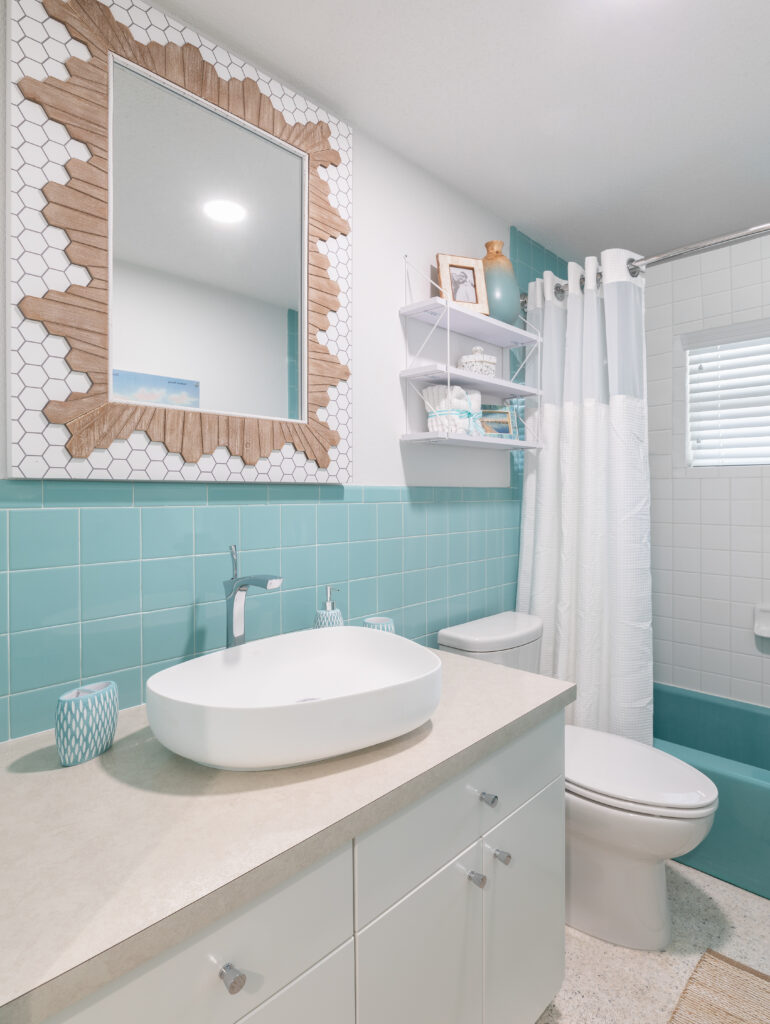 Further bringing her childhood memories of growing up in Manatee County into the redesign concept, Kaiser dug up old Manatee County postcards and turned the tangible time stamps into mountable wall art. “All of the artwork are replicas of old local postcards,” she shares. “Additionally, I framed some vintage postcards that had sweet correspondences from people vacationing in Bradenton on them. I loved finding those and using them—they reminded me a lot of when I was a kid and going to Bradenton Beach.” 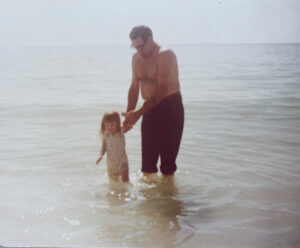 Kaiser was also quick to note that when she was a bright-eyed little beach bum, there were never any tall, boxy high-rise buildings around obstructing views of the shoreline, and if a structure was tall, it was on stilts. “Much of the Bradenton islands were full of one-story bungalows,” she shares. “That’s what Sailfish still is—built in the ’60s and footsteps from the beach.”

However, the 50 percent Fema rule makes it hard for owners of other nostalgic touchstones like the sailfish to justify keeping them as is without faulting to a complete teardown remodel, starting fresh and building upward. “Owners want to put money into these homes, but the Fema rule limits them to only spending 50 percent of the approved value of the structure if the structure was built before 1975,” Kaiser describes. “So, a lot of those old beach bungalows that had a great ‘Beach Boys’ vibe to them are simply gone. I’m glad this one is still around.”